For the last month and a half, I've been working on updating all the in-game buildings for our future UI update. Although we're still not sure when that update will be finished, a number of QoL changes and new items have been added to the game. You can see most of these changes yourself if you download the game from our itch io page. I hope you enjoy it because they are a lot more changes coming in the future!

New TileData Editor:
SimplyLiz (our lead dev) finished remaking our TileData in early February. This makes it very easy to add new buildings to the game, even if you don't know how to write JSON files. If you download the game on itch io, there should be an option to load the TileData editor when you click "Launch". 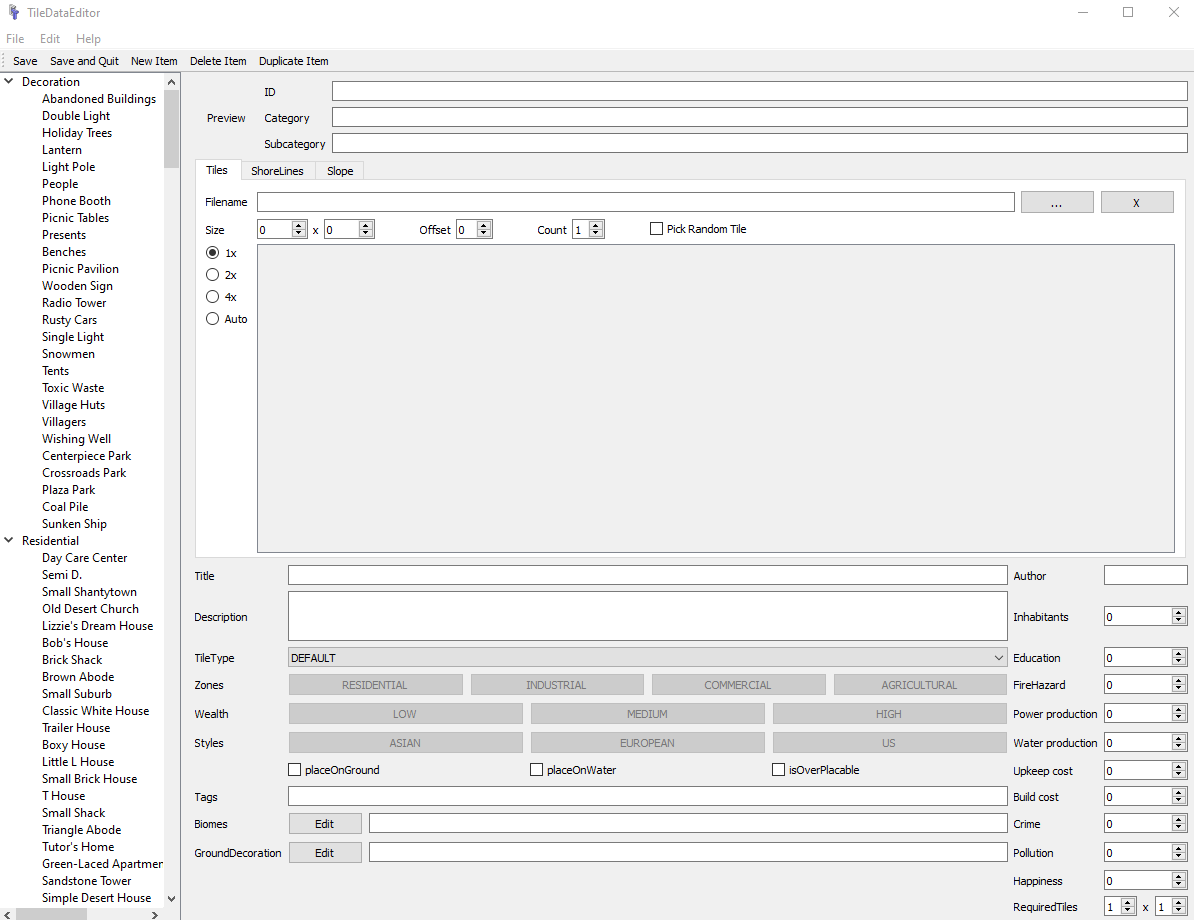 New Terrain Tiles and Ground Decos:
After the recent update, we added nearly thirty-five new terrain tiles and ground decos. These will make decorating your cities much easier. In addition, most of the buildings will now use the ground deco tiles underneath them, which gives many building extra variations. You can find these terrain tiles and ground decos in the Debug category. However, there is currently a bug with the shorelines. If you place water next to terrain, the shorelines will not appear automatically. To fix this, just use the delete tool on the water. This will update the adjacent tiles and cause the shorelines to appear.

New Categories:
After many months of laying dormant on GitHub, the new categories have finally been added to the game. Many of the buildings have been reorganized as well. Once the UI update is finished, the buildings will be organized even further. In addition, the game's default resolution has been set to 960x720p to compensate for these new additions.

Ponds:
Similar to the oases, ponds are a new item that will be used in map generation. They are small decorations that will appear within forests. Can you spot them in the following screenshot?

Texture Fixes:
Many, many buildings have been tweaked to remove stray pixels, incorrect shadows, and blank spaces. As I move into the future, I will keep an eye out for these problems as I add more buildings.

Future-Proofing:
Almost all of the in-game buildings have been updated with titles, descriptions, biomes, inhabitants, tags, and ground decos. Although most of these changes aren't visible in-game, they will help us in the future when the UI update is finished. Let me tell you, it is not easy writing descriptions for three hundred buildings. There are only so many synonyms for the word "house" in the English language. As a warning, some of the game's files have been moved around. If the game crashes after pressing "New Game", try reinstalling the game through itch io. This should fix any problems with misplaced files.

A Pretty Picture:
Please enjoy this nice screenshot I took with some of the game's new terrain tiles, rocks, and plants.